Confidence of a total control

After six decades of manufacturing and development solutions for bath-room and kitchen, experience and innovation are the terms that best define MZ, faucets and plumbing products.

MZ controls all manufacturing processes of its products, from the idea or concept to the final production, through the esthetic and functional design, always according to the most demanding quality standards (possibly the only Spanish faucet manufacturer with UPC certification, USA).

Own designs that mostly are based on its customers’ requirements and suggestions.

Demanding quality controls are performed during the process: materials, gauge checks, leaking test… to the final packaging and delivery.

From raw material to packaging, we meet the highest quality requirements and are checked by our qualified staff.

Past, present and future

M.Z. DEL RIO, S.A. is a company with a familiar shareholder whose origins go back to the year 1951. Since it was founded by Del Rio brothers, its main activity is the fabrication and distribution of sanitary items, mainly faucets and basin wastes.

The headquarters and the factory are located in the Industrial Area Empresarium, Cartuja Baja in Zaragoza, in a plot of 7.537,50 m2, where it has been built 3.500 m2 for the factory and 700 m2 for the offices.

Sales are divided between a 60% Spanish market and a 40% export mainly to America, and also present in 32 countries.

Since year 2004 has subsidiary in Florida (United States), MZ U.S.A. Inc. that acts as a regulatory warehouse, for all sales in this country, keeping stock and delivering straight to the customer.

The company has the certificate of quality system since 1999, likewise, it has well-established systems of total quality. MZ DEL RIO, S.A. counts with the homologations of its products according to the Spanish Ministry of Industry and with the norm ASME A118 for products supplied in United States.

M.Z. DEL RIO, S.A., counts with numerous recognitions in almost 60 years of existence, among them we can emphasize two; finalist of prize MANAGERIAL EXCELLENCE for PYMES in the year 2000 and PILOT prize in Logistics in the year 2005, both of them granted by Aragon government.

MZ DEL RIO products are made of fine materials: mainly brass, copper and stainless steel, which provide the products with fineness and quality.

We manufacture under the standards of European and American markets, in which we specialize, and our products are built with the strength and design of European products, adapted to American installation systems.

MZ DEL RIO is certified under the quality assurance system under the ISO9001 standard and our products are certified to European UNE 19703 and American UPC standards.

Our coatings are long lasting, one of our greatest distinguishing features, as we establish much stricter controls than those required by the standards. Our products have coatings which are over three times longer lasting than the requirements. 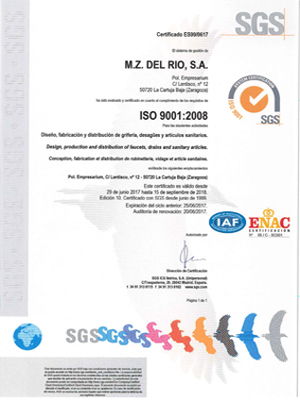 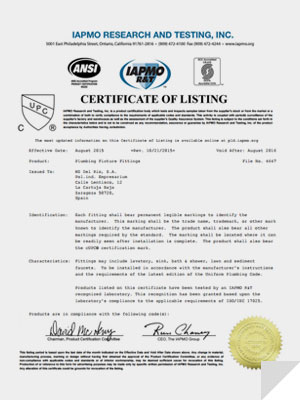 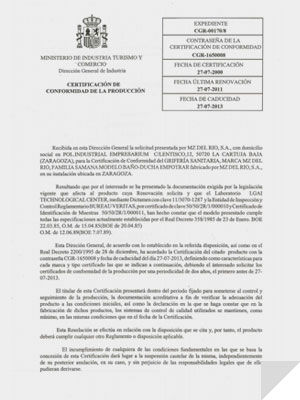